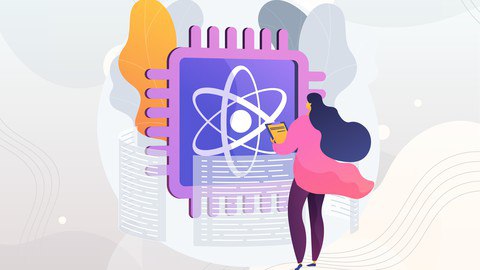 **Please note that more videos are being uploaded in the course**

Fascinated by Quantum Computing and it’s science fiction like capabilities? Then you arrived at the right place, this course is designed for you!

Quantum Computing is the intersection of computer science, mathematics and quantum physics which utilizes the phenomena of quantum mechanics to perform computations which classical computers cannot perform. Quantum computers are faster than classical computers and provides significant speedup in different kinds of algorithms such as searching data elements or breaking RSA encryption systems!

It is expected that the Quantum Computing industry is going to grow at a rapid rate from around USD 500 million in 2021 to nearly USD 1800 million (1.8 billion!) by 2026. Various industries such as banking, finance, space technology, defense, healthcare, pharmaceuticals, chemicals, energy, power, transportation, logistics, academia and government are going to do well out of this cutting-edge technology.

Several countries such as USA, China, Japan, UK, France, Germany, Spain, South Korea, India and Canada are investing large amounts of finances in the field of quantum computing due to its promising potential which is also going to create more jobs in this field. There is a huge talent deficit in the field of quantum computing and therefore much efforts and investments (in billions) have been put by various industries working on quantum computing through education and research. Some of the prominent players in quantum computing includes – IBM, Microsoft, Google, Intel, D-Wave, Xanadu Quantum Technologies, Rigetti Computing, Zapata Computing, Honeywell, IonQ, Cambridge Quantum, Oxford Quantum Circuits and many more!

This is a masterclass hands-on (practical coding) and theoretical course on quantum computing which will introduce you to the fundamentals of quantum computing and you will implement several important quantum algorithms which has practical real life use cases!

Just as Deep Learning, Machine Learning, Data Science or Artificial Intelligence became popular a few years back due to the availability of data sets and technology (GPUs and TPUs), in a very similar manner, the field quantum computing is witnessing rapid growth and is going to have a major impact in your lives through the release of products or services by industries. This is the time to make yourself future proof and remain ahead of others!

The course has been divided into the following parts which has a coherent structure to help you navigate according to your requirements:

This course is exciting and full of practical exercises to help you reinforce the concepts which you learn in each of the topics. You will be utilizing the IBM Qiskit and Python platform to construct the quantum circuits and various algorithms.

I am feeling very exuberant about Quantum Computing as it has already started to disrupt industries and research. I can’t wait to see you inside the course! I hope to see you soon in the course!

Make Laravel and Laravel 8 APIs and Apps fast with blueprint