Build a Augmented Reality (AR) App and Game with Unity 2021 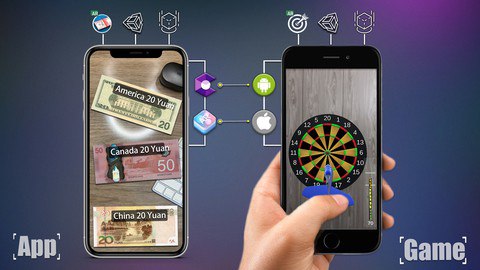 Learn to create an Augmented Reality(AR) App/Games from scratch in Unity 2021, developing a AR app/game was not easier from scratch before this interactive course. You are going to create your first Augmented Reality App/Game from start to end with monetization and will experience of publishing it to Google PlayStore and Apple AppStore.

What is this Augmented Reality Currency Scanner App is all about?

We will be learning in this app.

Planning and making the base structure of AR App.

Create XR Reference Image Library and basic setup for it.
Add Currency images and update image library.
Create a CurrencyScanner Script to get info of specific detected banknote.
Use Scriptable Object to create Data containers that will hold the image info and will be linked to XR Reference Image Library.
Adding audio capability to speak-out detected banknote name and linking it to data containers.

What is this Augmented Reality Dart Game is all about?

AR Dart is a Augmented Reality game in which players throw small missiles, also known as darts, at a circular target, known as a “dartboard”.
We will be using Unity game engine Augmented Reality(AR) capabilities with AR Foundation to develop this app practically step by step. AR Techniques used in this project can be utilized in any of your project. So you can develop your own AR idea in a easy way.

What You Will Learn Dart Game?

Each lecture is solving a subproblem and at the end we have complete project in a step by step practical way using these 32 lectures in this course. If you are a beginner who really doesn’t know how to create a AR app/game in Unity then this course will help you a lot. It can also help you in creating your final year project for your university or college. This course is designed for absolute beginners, but meanwhile, you should have a basic understanding Programming. The Unity packages includes Scripts or 2D/3D Assets are attached to the lecture in which they are used. You can download them and import in your practice project to match your project with course. The Scripts and 2D/3D Assets of this course is attached to the last lecture, and you can download that to use in your own projects.

This course benefit to: