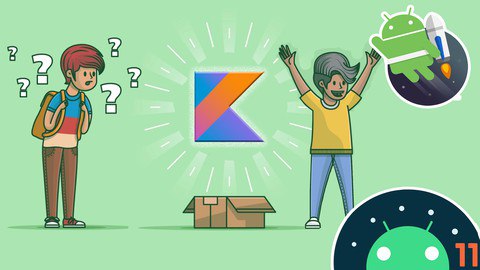 Android has ruled the app market for the past decade, and developers are increasingly looking to start building their own Android apps. How to Build Android Apps with Kotlin starts with the building blocks of Android development, teaching you how to use Android Studio, the integrated development environment (IDE) for Android, with the programming language Kotlin for app development.

Then, you’ll learn how to create apps and run them on virtual devices through guided exercises. You’ll cover the fundamentals of Android development, from structuring an app to building out the UI with Activities and Fragments and various navigation patterns. Progressing through the chapters and lectures, you’ll delve into Android’s RecyclerView to make the most of displaying lists of data and become comfortable with fetching data from a web service and handling images. You’ll then learn about mapping, location services, and the permissions model before working with notifications and how to persist data. Moving on, you’ll get to grips with testing, covering the full spectrum of the test pyramid. You’ll also learn how AAC (Android Architecture Components) are used to cleanly structure your code and explore various architecture patterns and the benefits of dependency injection. The core libraries of RxJava and Coroutines are covered for asynchronous programming. The focus then returns to the UI, demonstrating how to add motion and transitions when users interact with your apps.

By the end of this course, you’ll have the skills and confidence needed to build fully-fledged Android apps using Kotlin.