The 124-year-old ‘oldest lady in the world’ dies 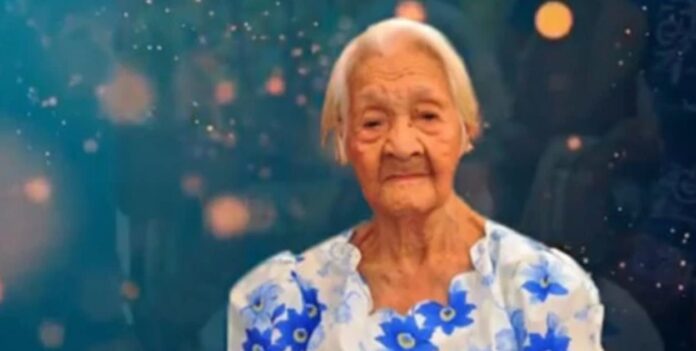 Francisca Susano, commonly known as Lola Iska, died monday Evening at her home in the Philippine city of Kabankalan.

According to local government authorities, she was the world’s oldest individual, two years older than the previous record holder.

Guinness World Records is said to have examined documentation as late as September, however she died before they could confirm her age independently.

Francisca Susano was born september 11, 1897, according to local records, one year before Spain ceded control of the Philippines to the United States.

It’s also the year of the invention of the ice cream cone and Marconi’s first transatlantic radio broadcast.

Lola’s longevity was attributed to a diet high in vegetables, low in meat, and free of pork.

Additionally, she said that avoiding alcohol had a significant factor in her attaining such an advanced age, according to the Sun.

The reason of Lola’s death has not been identified, according to Jake Carlyne Gonzales, public relations officer for Kabankalan.

He informed CNN Philippines that she will be tested for Covid-19 but that no signs of the virus were suspected.

Born in 1875, the Frenchwoman outlived her daughter and her grandchild.

She remained in excellent health for the most of her life, riding until she became 100 and was living alone until she was 110.

Jeanne previously said on a television broadcast that she had ‘never been unwell, ever’ and that she takes care of her skin with olive oil and a puff of powder.

As per Guinness World Records, the oldest man that ever lived was Japan’s Jiroemon Kimura, who passed in 2013 at the age of 116.

John Tinniswood, 109, a native of Liverpool, is now the UK’s oldest reside

On August 26, 1912, he was born – the same year that the Titanic crashed. He claimed that his secret was ‘eating fried fish and chips every Friday,’ but emphasised the need of moderation in living a long life.

John was double-jabbed with Covid-19 and is currently residing in a Southport care home.