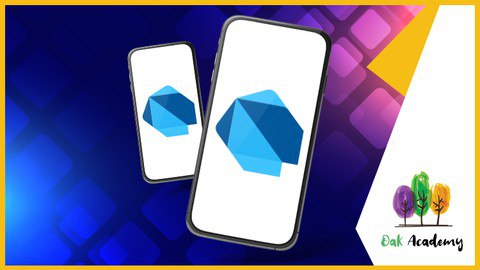 Welcome to The Complete Dart Language Guide for Google Flutter, I prepared the course assuming you have no prior programming background and Learn Dart ( programming language ) in depth. Includes basic to advanced topics and projects. Prepared Dart Flutter App.

Flutter is a Google SDK for building native interfaces for iOS and Android using the Dart programming language. Flutter can integrate with existing iOS and Android code bases. It’s free and open-source.

Flutter is Google’s UI toolkit for building beautiful, natively compiled applications for mobile, web, and desktop from a single codebase. Flutter dart was originally launched with support for iOS and Android. Flutter 2 was launched as a stable release in March 2021, with support for Windows, macOS, Linux, and web. Flutter runs with dart, a programming language developed by Google. Dart is a strongly-typed, object-oriented language with a familiar C-style syntax. Developers can compile Dart programs into fast native code that runs smoothly on all supported platforms. On the web, dart flutter is compiled to JavaScript code that can run on the browser. Flutter web is composed of three architectural layers: the Flutter framework, which is written in Dart and provides all the widgets that developers use to build their apps; the flutter firebase Engine, written in C++, which provides low-level rendering support.

Flutter is a Google SDK for building native interfaces for iOS and Android using the Dart programming language. Flutter can integrate with existing iOS and Android code bases. It’s free and open-source.

Why did Google create Flutter?

Flutter, first known as “Sky”, was announced in 2015 with Android support only. It was created to provide a better mobile experience for users and developers, taking the best parts of the web development experience, and bringing them to mobile. Its main goals were high-performance and portability across multiple platforms. While other cross-platform solutions such as React Native and Xamarin were already popular, they could not deliver the same fidelity and performance as apps built with the native iOS and Android SDKs. Flutter changed that by making it possible to create beautiful, performant apps across multiple platforms with a single codebase.

Is Flutter in demand?
Flutter has been a production-ready, stable product on iOS and Android since its official launch in December 2018. Big companies such as eBay, BMW, Alibaba, and Toyota are using Flutter as the core framework for their mobile app development strategy. Over a hundred thousand Flutter apps have already been published on the App Store and Play Store. After overtaking React Native in Google Search trends, Flutter is now the fastest growing software project on GitHub. By choosing Flutter, companies can deliver mobile apps in record time as they no longer have to build separate apps to support iOS and Android. This makes Flutter an ideal choice for startups, agencies, and small businesses, and as a result, the job market for Flutter developers is also expanding rapidly.

What applications use Flutter?
There are social networking apps for creating and sharing content, dating, and connecting people through events and real-life activities that use Flutter. Alibaba made a shopping app called Xianyu, which has more than 50MM downloads and more than 10MM active users every day. Nubank is the largest independent digital bank outside Asia, and its mobile apps are built with Flutter. Another shopping app is HuYu, which rewards users with gift cards and vouchers for sharing shopping receipts. You can also find music apps for recording and learning to read music. The Hamilton Musical and the famous Abby Road Studios created apps with Flutter. There are apps for sports, finance, fitness, education, animal adoption, mapped gas stations to compare prices, and a travel app. A Google Ads app helps mobile app customers track their ads.

This course will get you up and running quickly, and teach you the core knowledge you need to deeply understand and build dart flutter programming thus, we will have prepared a strong foundation for Flutter applications.

This course is for beginners. Before taking this course, You don’t need to know any language. In our course, the basics of dart programming is dealt with in detail and students are provided to test what they have learned with code quizzes prepared for each subject.

During our course, you will be informed about the basics of Dart in detail and how to solve problems.

This course was crafted to benefit absolutely any level of developer. We will start flutter and dart from scratch and learn how to create a development environment for Flutter in mobile development.

During the course, I made sure to explain all the topics that may seem complicated to you as simple and detailed as possible. I have used some diagrams to help you understand better.

The powerful features and capabilities of fluter allow you to create complex, customizable, modern, responsive, and user-friendly web applications in mobile app marketing.

After taking this course you’ll be able to fully take advantage of all features for Dart in Mobile Development.

In this course, Develop modern, complex, responsive and scalable web applications with Dart in Firebase

Our course based on learning by making practice.

Why would you want to take this course?

Our answer is simple: The quality of teaching.

OAK Academy based in London is an online education company. OAK Academy gives education in the field of IT, Software, Design, development in English, Portuguese, Spanish, Turkish and a lot of different language on Udemy platform where it has over 1000 hours of video education lessons. OAK Academy both increase its education series number by publishing new courses, and it makes students aware of all the innovations of already published courses by upgrading.

When you enroll, you will feel the OAK Academy`s seasoned developers expertise. Questions sent by students to our instructors are answered by our instructors within 48 hours at the latest.

All our videos are created/produced as high-quality video and audio to provide you the best learning experience.

My students says that: Recommended for those who start Flutter from zero like me. I’m a backend programmer, and I know nothing about the mobile realm. Now I can build my own mobile app. I’m really excited!
Flutter & Dart

See you in the course!